Next Post The Men on the Mountain – Mamadou’s story 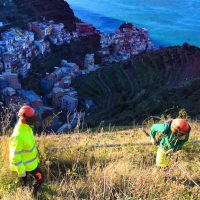 The Men on the Mountain – Ousmane’s story

When we discuss land restoration in Manarola, we recognize that it’s much easier to talk about these projects than to physically get up and do the hard-manual labor it takes to bring such plans to fruition.

Ousmane sits down and almost instantaneously opens up about his experiences at home in Gambia and his new home in Italy.

He is in his early twenties and came to the decision that his situation in Gambia was unsafe and he could not stay there any longer. He escaped to nearby cities within Gambia then border countries but soon realized he would never be safe until leaving Africa entirely.

Once arriving in Italy, he experienced rough living conditions in over-crowded shelters and the unsettling lack of purpose that comes with being jobless and having visa documents tangled up in various bureaucratic ropes. 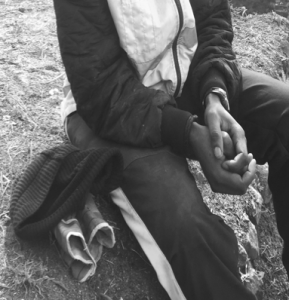 Despite the initial difficulties, Ousmane was transferred to La Spezia. Through the help of  Caritas he was able to participate in the Manarola Foundation and Cinque Terre National Park Foundation land restoration training program. Also, he is currently studying at a school in La Spezia, trying his best to improve his general education. “I want to stay in Italy so I must learn the stories, the ways and laws”.

He reflects on how Italians have treated him, “I just want to say thanks for taking us from the sea and bringing us here. Now we are studying and experiencing a lot of things. I’m thinking and I’m hoping that maybe later it will all be fine.”

Ousmane notes that he has experienced some prejudice during his time in Italy. For example, on the bus, “no one sits near you or they cover their noses because they think you smell.” But he doesn’t concern himself with this because he feels generally respected overall, especially in Manarola. “Manarola is nice, really nice”, he says while taking a pause and looking down towards the village below the plot of land we are sitting on. “How do I say it? It’s for the humanity”, Ousmane tells us if you have no money and people still respect you then that in itself is worth millions. He has found this respect in Manarola. “Yeah, the humanity [here]”, he nods and looks back at us.

Giancarlo Celano, his instructor in the training program has been very kind to him. He says, “[Giancarlo] does not see Gambian, he does not see black or white. He simply observes Ousmane’s work, explains if there is a problem and shows him how to improve“.

“We’ve found good people here. Not only Giancarlo but all the guys working here. If you are walking by or working, they greet you and ask you how you are, if you are fine and they chat with you”, he says. “If we came here and they closed their eyes to us it would be really difficult, but they open everything for us, explain everything very nice for us”, he states.

“I don’t worry about the future”, says Ousmane. Although he acknowledges things aren’t perfect at the moment, he hopes to forge his own road in pursuit of a good and happy life.